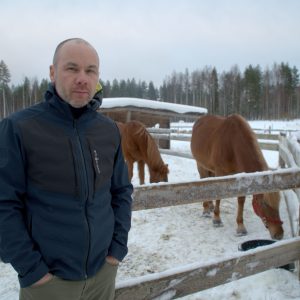 After completing upper secondary school, Niko Varis considered two further education options: studying history at university or wood technology at a university of applied sciences. Opting for the latter, he specialised in mechanical forest industry during his studies in Joensuu in the mid-1990s

In 1999, Metsä Timber, which operated under the name the Metsäliitto Group (now the Metsä Group), posted a job advert on his university’s notice board, looking for employees for an SAP project who were willing to travel for work. The company was implementing an enterprise resource planning system called SAP and it needed employees who would travel from one sawmill to another to cover for employees attending training on the new system.

Soon Varis found himself working as an instructor for the programme. ‘That’s how I ended up working in ERP-related tasks in the Metsäliitto Group, and in the end, I headed an international ERP team.’

At that time, Varis lived in Southern Finland with his spouse but in the early 2000s he began to feel it was time to return to his roots in North Karelia. After relocating, he worked remotely Mondays and Fridays from his home office and spent a few days a week at his workplace in Espoo.

In 2012, he started a new chapter in his career when he transferred to the metal industry company Outotec, based in Outokumpu. While his commute shortened significantly, his tasks remained similar as he carried on working with SAP system implementation.

‘At one stage, I was also responsible for the production process, and because Outotec has production plants in the US, China and the Middle East, in addition to Finland, I had the opportunity to do stints on the other side of the world. It was great to learn more about different cultures,’ shares Varis, describing his international experiences.

A transfer to Iivari Mononen

Varis’s father had sold wood for poles to the Mononens from the family’s forests for a couple of decades. In addition, Varis had got to know Ari Mononen, the managing director of the company, as both men played Finnish baseball. One time, when Varis was picking up fencing poles for his farm, Mononen asked whether he would like to come and work for his family firm.

‘In 2016, I took the helm of the Iivari Mononen Group’s ERP implementation project, which was already underway, and I headed the ÉRP team until my transfer to Norway.’ In 2020, Varis moved to Ilseng in Norway for a year to manage pole production operations at Scanpole’s production facility there.

‘In ERP system projects, business has always been the priority but this gave me the opportunity to test the functionality of the system as a user.’

Scanpole operates two production plants in Norway. ‘We sell large quantities of creosote-impregnated fencing poles to Britain. Exports to Britain began in spring 2020 and demand has grown at a rapid rate ever since,’ explains Varis. In addition, copper-impregnated fencing poles are sold to the Nordic market, and the company is one of the largest manufacturers in Norway.

The plant in Ilseng also produces pressure-treated lighting and electricity poles. The company has long traditions in this area, and exports of these products to Britain have also increased in recent years. The company’s other production facility, which is located in Kirkenaer, focuses on the manufacture of fencing poles and also takes care of the copper-impregnation process for the products made in Ilseng.

Even though Varis and his family have returned to Finland, he still continues his tasks in Norway remotely. ‘We have a great team there and I work closely with a local project leader. The family firm’s unique qualities, values and appreciation of the local characteristics is evident in all its facilities, irrespective of the country.’

Niko Varis lives on a small farm about 10 kilometres from the centre of Joensuu with his wife and three children. The oldest part of the farm’s main building dates from the 18th century.

‘Picking up your tools and fixing some part of an old building is a great way to take your mind off data networks,’ says Varis, explaining how he finds a balance between work and leisure. In addition to DIY, he enjoys exercise and winter swimming. ‘I got into ice swimming about five years ago and now I have a hole cut in the ice on the lake by my house.’

Some of his time is also taken up by the family’s three horses, five sheep, three dogs and a Norwegian forest cat that the family brought back from Norway. ‘It’s a lovely cat. We’ve had cats before but this one is in a league of its own when it comes to catching mice,’ says Varis, smiling.